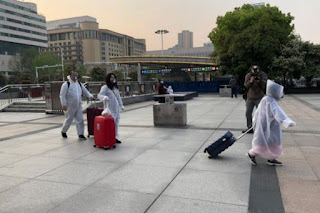 Wuhan, the epicenter of the Coronavirus pandemic, was placed on a major lockdown for more than 10 weeks to contain the outbreak. The lockdown was finally lifted on Wednesday.
The city of 11 million people was shut off on January 23, with no one allowed to enter or leave. Most of the nearly 82,000 confirmed infections and 3,331 deaths in China have been in Wuhan.
However, as the virus has been brought under control in Wuhan, China, the lockdown was lifted.
Photos taken on Wednesday, April 8, show people leaving their homes, all wearing masks, some clad in the white full-body protective suits.
A lot of people can also be seen travelling as they’ve finally been allowed to reunite with families and go back to their jobs.

An estimated 55,000 are set to leave Wuhan by rail on Wednesday, officials said, with about 21,000 leaving via Hankou, the city’s oldest railway station a stone’s throw away from the Huanan Seafood Market, an early focal point of infections.
Just past 6am, scores had already been patiently waiting to board the first train out of Wuhan – a high speed rail to Jingzhou, about 200km away.
Many were holding gift packs which had been given out by station management, who had arranged for staff to stand at the platform holding up red signs that read “Hankou Station welcomes you”.

“I’m just very happy that we can finally leave, it’s been too long,” said a man who gave his name only as Mr Zheng, Strait Times reports.
The airport was a hive of activity. The first flight was at 7.25am that flew to Hainan’s Sanya with 49 people on board.

By about 9am, hundreds had streamed to the airport where a positive health code is required for entry.
Travellers had to show the same code before they were allowed to approach the check-in counter, and once more at the boarding gate.
Airport officials said 96 flights are expected to take off from Wuhan on Wednesday alone, with 11,855 travellers expected to come through the airport.
The Strait Times China correspondent, Elizabeth Law was at Wuhan early today to capture Wuhan after the lockdown was lifted.
She revealed that people have not lowered their guards despite that fact that the virus appears to be under control.
There are usually at least 3 layers of security checks in public places; involving temperature checks, disinfectant spray, and people are constantly reminded to stay at least 1.5m apart.

Read her tweets below.