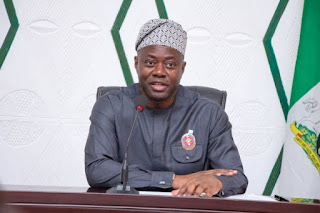 Governor Seyi Makinde of Oyo State has revealed that he took carrots, black seed oil, honey and vitamin C as he battled the Coronavirus disease during his isolation period.
The governor on March 30, announced he had tested positive for Coronavirus and was going into Isolation. On Sunday April 5, he took to his Twitter handle to announce that he had become negative after series of tests.
In an interview with Fresh FM Ibadan on Monday April 6, Makinde said in boosting his immunity to fight Coronavirus,  he consumed vitamin C, carrots and black seed oil mixed with honey.
“My very good friend and brother, Dr Muyideen Olatunji is the one in charge of the primary healthcare for Oyo State. He came to me and said, look, I am going to send to you this black seed oil, it boosts immunity. So, I mixed it with honey and took one teaspoon in the morning and one in the evening.

So, there are local solutions to boost immunity. Our people should not fret. Just as I’ve been able to get the virus out off my system, so will it be for majority of our people. I’ve lost a little bit of weight which I think is good. When you’re in isolation, the tendency is just to watch television and eat, I was eating amala. But I was also using the treadmill. It has also been a period to reflect and look at the programmes, policies and the things we want to do for the people of Oyo state and also reflect on how the COVID-19 is going to affect us socially and economically.” he said