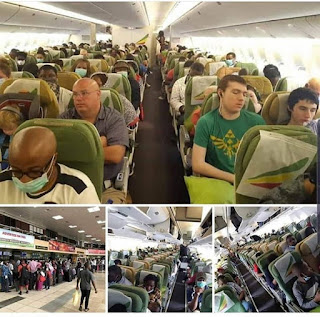 American nationals have finally been evacuated from Nigeria days after they were left stranded at the Lagos International Airport.
An Ethiopian Airlines flight carrying 376 US citizens departed from Murtala Mohammed International Airport, Lagos, for Washington Dulles international Airport on Monday, April 6, 2020.
According to the US consulate in Nigeria, the chartered flight departed at 5:25pm Nigerian time.

The consulate said it is the first in a series of repatriation flights for American citizens out of Lagos, adding that more flights would depart Lagos within the next few days.