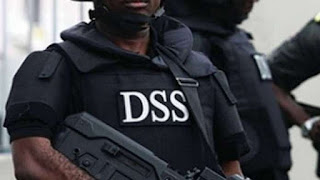 A former Politics Editor at Daily Trust newspaper, Ibrahim Dan-Halilu, has been arrested by the Department for Security Service (DSS) in Kaduna State for allegedly supporting the activities of RevolutionNow in a Facebook post.
The group, which is agitating for revolution movement in Nigeria, was convened by Omoyele Sowore, Publisher of Sahara Reporters.
It was gathered that Dan-Halilu, a former staunch supporter of President Muhammadu before the 2015 elections was once a communication specialist with USAID, Information Assistant at the US Embassy and a Regional Communication Specialist for Family Health.
Operatives of DSS, it was gathered stormed Dan-Halilu’s residence in Rigachikun, Kaduna State, on Monday morning and whisked him away at about 2am. Dan-Halilu posted on his Facebook timeline that he endorsed and supported the activities of #RevolutionNow.

The post reads: “I feel I should share because it resonates with me. If resonates with you too, please share until all oppressed people of Nigeria get the message and domesticate it. This is #Not the Nigeria of My Dream.

“We need to restructure the country. We need to put an end to trillions spent on electricity while we live in darkness and pay estimated bill for electricity and meters. Why do we have huge oil reserves but our refineries are dead and we are re-importing what we exported as crude oil? It is time to ask why those in government travel abroad for medical care when they have left our hospitals dilapidated; why they send their children to school abroad when our children learn under mango trees.

“We are revolting against the continuing killings that have left 20,000 Nigerians dead while those in office move around under state paid security and do nothing. We are revolting against the because over a thousand Nigerians soldiers killed by Boko Haram have been secretly buried without identifiable graves, dignity or honour. $16m was purportedly spent on mosquito nets but our children die daily from malaria. $320m Abacha loot was purportedly distributed to the poor. Where is the verifiable list? N500bn was purportedly distributed to the poor as so-called Trader-moni. Where is the verifiable list?

“…With divine grace, God gave us about 40 natural resources spread across the length and breadth of the country. No country on mother earth is as blessed! The persons destroying Nigeria in and out of government are less than 10,000. For how long will the 201 million of us be silent? Forever? It will be sheer stupidity and very unfair of us to be silent and bequeath today’s sorry Nigeria to our children. For how long shall we continue to endure bad leadership from certificate forgers, election riggers, ritualists and yahoo politicians, hoping upon hope for a better tomorrow when things get worse by the day? We are too rich to be poor. We are too blessed to be a mockery of the world!!! No!!!”

Meanwhile, a security source who spoke to PRNigeria in confidence, confirmed that DSS operatives had invited the former Daily Trust Editor on Monday night. He, however, pointed out that the reason behind the detention of Dan-Halilu was not for any serious issue.
He said: “Contrary to the speculation going rounds, DSS just wants to get some necessary clarification from Mr. Dan-Halilu on vital security issues. That’s all and nothing more.”