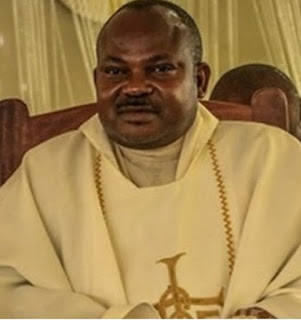 The Enugu state police command have arrested suspected killers of Catholic priest, Rev Fr Paul Offu.
Offu was murdered by some men along the Ihe-Agbudu Road in Awgu on Thursday night, August 1st. Until his death, he was the parish priest of St. James the Greater Parish, Ugbawka.
Announcing the arrest of the suspected killers, the state Commissioner of Police, Sulieman Balarabe, told newsmen that the command is still investigating the gruesome murder. He however refused to disclose the number of suspects arrested.
Offu’s death came barely five months after Rev Fr Clement Ugwu, the parish priest of St Mark Catholic Church, Obinofia Ndiuno in Ezeagu Local Government Area of the state, was killed.
Enraged by the killings, priests of the Enugu Diocese staged a protest at the office of Governor Ifeanyi Ugwuanyi on Thursday August 2nd, demanding justice and the arrest of the killers.