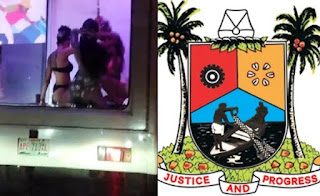 The Lagos State Government has suspended the license of Provision Media System Limited, the advert company behind the transparent outdoor display truck with dancing half-naked ladies that ignited an uproar on social media.
Recall that the truck with number plate APP 713 XL was spotted in late hours of Friday August 2, with half-naked ladies dancing on a stripper pole.
Announcement of suspension of the firm’s license was made in a statement released by the Lagos State Signage and Advertisement Agency (LASAA) and signed by its Chief Executive Officer Bolaji Sanusi. LASAA alleged that the act which has a two-year imprisonment on conviction, debased the moral fabric of Lagos. The statement reads;
The statement read:

“The Government of Lagos State, under the leadership of Governor Babajide Sanwo-Olu, has zero-tolerance for any slightest attempt by anyone, under any guise, to debase the moral fabric of our dear state.

“Nobody can hide under the guise of engaging in outdoor advertising business to display obscenity that is antithetical to our cherished cultural and moral values.

“The full weight of the law, as enshrined in the agency’s extant law, will be meted on the company owning this erring outdoor mobile truck.

“We assure members of the public that the agency shall henceforth scrutinise activities of mobile trucks to forestall a recurrence of such an obscenity. ”