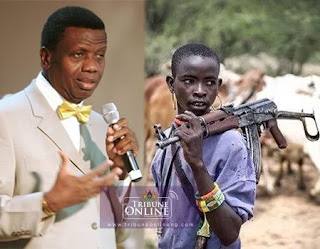 The General Overseer of the Redeemed Christian Church of God (RCCG), Pastor Enoch Adeboye, on Friday decried the worsening state of security in Nigeria, declaring that the country had never been this bad.
Pastor Adeboye, who said the spate of killings, abduction and general banditry across the nation was unprecedented, also announced the kidnapping of five pastors of his church on Thursday evening at J3/J4 area of Ogbere on the Benin-Ijebu-Ode-Sagamu Expressway.
The Ogun State police command, through its Public Relations Officer, Abimbola Oyeyemi, confirmed the incident.
The abducted pastors were travelling in a commercial vehicle with registration number KW 230 XA belonging to Abia Line Transport Company which was coming from the eastern part of the country heading towards Lagos.
They were said to be on their way to attend the church’s Ministers’ Conference in Lagos when they were attacked by hoodlums numbering about 10, who were reported to have forcefully stopped the vehicle.
The police spokesman told journalists in Abeokuta that the gunmen, after forcing the vehicle to a halt, whisked away four men and a woman into the forest but left behind the driver, a sick passenger and his wife in the vehicle.
The abducted pastors, according to the police, are Chidioze Eluwa (male), Chiemela  Iroha (male), Okoro Ohowukwe (male), Ndubuizi Owuabueze (male) and Ibeleji Chidinma (female).
Pastor Adeboye, while giving a talk at the Ministers’ Conference holding at the Redemption Camp located along the Lagos-Ibadan Expressway, lamented the spate of insecurity in the country, saying that the situation had never been this bad.
He added that the abduction of the pastors gave him a sleepless night on Thursday and charged the congregation to pray for the safety and freedom of the abducted pastors.
He said this was the first time an incident of this magnitude had happened to the church.
“As a father, how do you think I should feel to hear that five of my children have been kidnapped while on their way to attend the Ministers Conference?” he said in response to a journalist’s question.
The Ogun State police spokesman, Oyeyemi, a Deputy Superintendent of Police, however, said the command could not ascertain whether or not the captives were pastors of the RCCG.
“It cannot be confirmed that those abducted were pastors but it was learnt that five people, including four males and a female, were abducted while travelling inside a bus from the East to Lagos.
‘My wife slept with her pastors; accused me of using our son for money ritual on a radio’
“The hoodlums came out from a forest around Area J3 along Benin-Ore-Ijebu-Ode Expressway and kidnapped these people. We are on top of this and in due course, they will regain their freedom,” he added.
He said through surveillance, the whereabouts of the kidnappers and their victims had been revealed and the state’s Commissioner of Police, Bashir Makama, had personally led the police rescue team to the location.
“Through surveillance, we have got to know their location but we don’t want to attack them so that we won’t put the victims’ lives in danger. By the grace of God, we will rescue the victims,” Oyeyemi said.