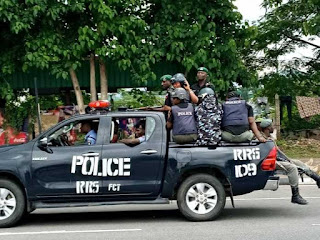 Men of Ogun State Police command said one of the abducted officials of the Redeemed Christian Church of God along J3 forest on Ogbere road, in the state has been rescued.
The Police Public Relations Officer in the state, Abimbola Oyeyemi said Mrs. Ibelegbo Chidinma, the only woman among the five victims has been rescued early Saturday morning.
Oyeyemi said ,”The Ogun state police command wishes to inform the general public that one of the kidnap victims Mrs Ibelegbo Chidinma the only woman amongst them has been rescued unhurt.
“The woman who is a Deaconess of the Redeem Christian church of God regained her freedom in the early hour of today 3rd of August 2019 and she is currently at the command’s headquarters in Abeokuta where arrangement is being made to take her to the Redemption Camp.
“Efforts are on top gear to rescue the remaining victims as the kidnappers who kept them in separate locations were changing their locations from time to time within the forest.
“The command hereby wishes to assure members of the public that the remaining victims will soon be rescued”
The Inspector General of Police, IGP M.A Adamu, yesterday, ordered massive manhunt for the killers of Rev. Father Paul Offu, a Catholic Priest in charge of St. James the Greater Parish Catholic Church Ugbawka in Enugu state and the rescue of RCCG Pastors who were abducted along J3 Area of Ogbere on their way to Lagos from the Eastern part of the Country.
The IGP, while condemning the killing of the Catholic priest and the abduction of the clergymen, calls for calm and assures that the perpetrators will not go unpunished.
He therefore enjoins the public to avail the Police with credible information that will assist in apprehending the criminals.