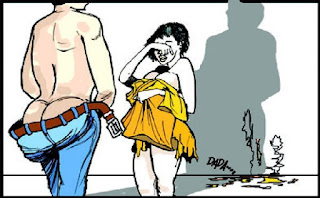 A sixteen year-old girl who was allegedly raped by an Islamic cleric in Ede, Osun State has threatened to take her life should the case instituted against the cleric was settled out of court.
The victim was said to be a student in the cleric’s Arabic school.
The cleric was arrested by the Osun State police command in June after which attempt was made to settle the matter within family circle.
Ruga: Ooni of Ife meets Buhari, says “we don’t want war in South West” (Opens in a new browser tab)
The cleric, it was gathered was arraigned at the magistrate’s court sitting in Ede and had till yesterday, August 2, 2019 to report to the Magistrate A. A Olowolagba to explain whether the case has been settled.
However, as both parties did not reach an agreement when the case came up yesterday, the magistrate further adjourned the matter till August 24, for report of settlement or commencement of definite hearing.
The victim, however, insisted that all she needed was for justice to take its course.
“I am not interested in any settlement. I want him to be punished for what he did. This can’t repair the damages he has done to me.  I will kill myself if the case is eventually settled out of court. All I want is justice, that is all I want,”the distraught teenager said.
The complainant in the matter, Muyideen Oloyede said concerned members of the family were yet to be contacted for settlement, adding that even if they did, they were not ready for settlement.
He said, “ We are aware that he (the accused person) has met with elders in the family who have been pushing for the case to be settled out of court. They even held a meeting of recent where not even myself as the complainant or the victim was invited. His brother who attended was not allowed to say a word.  Those of us who are directly involved want justice, though there have been pressures from community leaders and some well respected clerics. If we must shift ground, he must admit he committed the crime and clear all the falsehood he has been peddling about the innocent young girl.“
The counsel to the complainant, Rasheed Maisolati who spoke after the hearing said that the accused family had reached out to the victim’s family before arraignment and they were given terms of settlement which they were yet to agree to. He added that the accused’s family met with the elders in the family in a bid to encourage members to agree to their own terms.