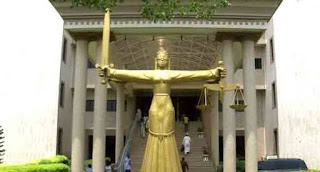 A 63-year-old man, Akin Lawrence, has been dragged before a magistrate court in Odigbo, Odigbo/Ore local government, Ondo State, for allegedly impregnating a 34-year-old imbecile.
Lawrence was charged to the court with the offence and subsequently ordered to be remanded in prison as he could not perfect his bail conditions on time.
Police prosecutor, Inspector Usifoh James, told the court that the accused person committed the act sometime in April 2019 at about 2pm at Kiwi Street, Ore, Ondo State, by unlawfully having sex with the complainant, Olubukola Modimu, an act that resulted in a pregnancy.
Lawrence, however, pleaded not guilty to the charge.
James urged the court to adjourn the case to enable him study the case file and assemble his witnesses.
Counsel to the defendant, Mrs K.M. Lawan, did not oppose the adjournment date requested by the prosecutor. But Lawan prayed the court to grant her client bail in most liberal terms.
Magistrate T. J. Ajayi granted the accused bail in the sum of N100,000, with two sureties in like sum and adjourned the case till August 7, 2019.