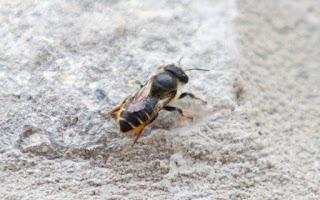 A Turkish bee that got into the United Kingdom through the luggage of a British family that visited Turkey has been declared wanted.
The rare osmia avosetta species is to be destroyed on sight as it is considered a threat to native species. The Telegraph reported that the Department for Environment, Food and Rural Affairs (Defra) said the bee had been living in and around the Toy family home in Bristol since their return from the coastal district of Dalaman in Turkey’s Aegean province of Mu? Last week.
Commenting on the Toy family’s claim of the bee escaping the British Beekeepers Association warned on Monday July 29, that the osmia avosetta could devastate the already imperiled native populations either through spreading deadly viruses or by breeding and eventually out-competing other bees.
It was also learnt that the Animal and Plant Health Agency (APHA) which is a part of Defra, is planning to pick up four remaining cocoons from the Toys on Wednesday for DNA testing. British officials have become acutely sensitive to the presence of foreign bees since invasions of predatory Asian hornets began in 2004.