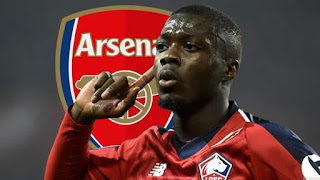 Arsenal have confirmed the signing of Nicolas Pepe in a £72 million ($87m) deal.
The Ivory Coast international becomes the club’s fourth signing of the transfer window and the deal smashes the club’s transfer record, which was previously set by Pierre-Emerick Aubameyang’s £56m ($68m) move from Borussia Dortmund in 2018.
Pepe has been in England since Tuesday morning when he travelled to Arsenal’s training centre at London Colney to undergo a medical and meet his new team-mates.

And – despite a slight delay in finalising the paperwork – the Gunners have officially announced the capture of the 24-year-old from Lille.
Arsenal boss Unai Emery said: “Nicolas is a highly-rated and talented winger who was wanted by many of the top teams in Europe.”