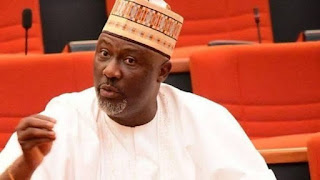 Senator Dino Melaye, the People’s Democratic Party’s Governorship aspirant in Kogi State shared his dream of becoming a President after the realization of his Governorship ambition in a meeting with party excos at the party secretariat in Lokoja.
The Senator representing Kogi West Constituency also presented his blueprint comprising his mission and vision for the state when he visited the NUJ press center on Wednesday July 31.
Dino Melaye stated that he was in the governorship race to build a ‘New Kogi’ and he also sees it as a stepping stone to his presidential ambition which will take off in 2027.

He said: “Kogi State is not witnessing democracy, what we are witnessing is government of the greedy, by the greedy and for the greedy; best put as ‘greedocracy’.

“But when I come on board as governor, I shall build a new Kogi State where ideas will revolutionise the state.

“My administration will banish hunger from the state. Kogi has no business to be poor. I shall look into agriculture and technology to turn around the economic fortune of the state.”

“I have no father, uncle, in-law or godfathers to pilot my ambition, but I have the requisite requirements to face the APC candidate in the election.

“I fear no body, I only respect human beings. I have been arrested 18 times within the last three years and I have 12 cases in court, but I’m still standing. I have what it takes to face and rescue the state from Yahaya Bello.”