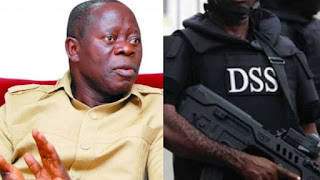 An ocean of trouble is currently flowing at the national secretariat of the All Progressives Congress (APC), with its National Chairman in the middle of it.
The trouble has already resulted to locking-up the main office of the vocal APC National Chairman, Adams Oshiomhole, by the officials of the secret police since Monday this week.
The media reliably gathered from a senior member of the party who is a staff at the party house that about five DSS officials stormed the APC national secretariat on Monday and move straight to the main office of Oshiomhole but met his absence, thereby leading to padlocking of the office.
It was learnt that the secret police locked both Oshiomhole’s main office and that of his personal secretary, leaving only his reception office opened.
The source, who could not ascertain the main reason for the action of the DSS, revealed that Oshiomhole’s led-National Working Committee (NWC) had been accused of several bribery allegations.
He said: “The bribery scandal started before the last general elections where some members accused the NWC of taking bribe to favour some candidates at the primary elections.
“But the recent one has to do with the forthcoming Kogi governorship primary where one of the aspirants were said to have bribed settled the NWC to favour a certain mode of primary.”
The dependable source, who revealed further that an emergency meeting of the NWC was held on Wednesday without the National Chairman, the source challenged Oshiomole to resume to his office on Thursday if the information was a lie.
“Already, some NWC members who were not indicted stayed away from the Wednesday’s meeting,” he revealed.