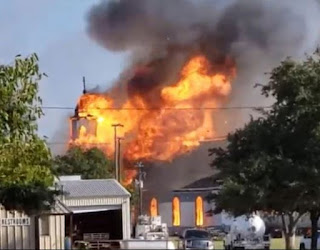 A Roman Catholic church that stood in Texas for more than century mysteriously burned to the ground with insurance adjusters placing the damages at $3 to $4 million.
The 125-year-old Church of Visitation in Westphalia caught fire on Monday morning July 29th, just as congregation members were planning a celebration for the anniversary of its completion.
Video and photos captured at the scene show the historic house of worship engulfed in flames with some residents reportedly seeing smoke from as far as five miles away.
Joe Vasquez, bishop of the Austin Diocese said as the church was burning; “It’s extremely difficult and painful to be here. I’m very deeply affected by this and I know the people here are also heartbroken”.
Over 250 residents were said to part of the Visitation congregation. It’s unclear where they will be gathering in the wake of the fire. The church said it will be accepting donations to help rebuild.
Vasquez added: “This architectural beauty is now a loss and that’s what saddens all of us here”.
ATF agents and the local State Fire Marshal’s Office were investigating the blaze Tuesday to see if there was any criminality involved. It was not immediately clear how it started.