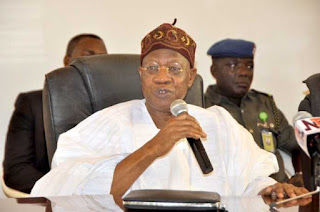 Lai Mohammed, former Minister of Information and Culture, on Tuesday said some remarks attributed to him on social media should be disregarded.
Mohammed, who is President Muhammadu Buhari’s ministerial nominee recalled that his grandson once asked him if he was a liar.
The former Minister had been called out on social media for lying to cover-up the current All Progressives Congress, APC-led Federal Government.
However, speaking during his ministerial confirmation screening on the floor of the senate, Mohammed said: “Don’t believe social media, they call me all sorts of names. My seven-year-old grandson once asked me if my name was Liar Mohammed.”
Following his submission, the Ogun Central Senator, Ibikunle Amosun said Mohammed should be allowed to take a bow and go.
“We have all agreed that he will be allowed to take a bow and go. There is no need to ask him questions,” he said.
Also Bamidele Opeyemi, Senator representing Ekiti Central, said Mohammed’s ministerial nomination in 2015 was compensation from Buhari.
The Senate had on Tuesday last week commenced the screening of the ministerial nominees Buhari sent to them for confirmation among whom was Mohammed.
The nominees include: Chris Ngige, Babatunde Fashola, Hadi Sirika, Rotimi Amaechi, Adamu Adamu, Mohammed Adamu, and Lai Mohammed.
Others in the list are: Uche Ogah, Emeka Nwajuiba, Sadiya Farouk, Musa Bello, Godswill Akpabio, Sharon Ikeazor, Ogbonnaya Onu, Akpa Udo, and Adebayo (Ekiti), Timipre Sylva, Adamu Adamu, Shewuye (Borno), Isa Pantami, Gbemi Saraki, Ramatu Tijani, Clement Abam.
Also listed among the nominees are: Rauf Aregbesola, Paullen Tallen, Abubakar Aliyu, Sale Mamman, Abubakar Malami, Muhammed Mamood, Mustapha Buba Jedi Agba, Olamilekan Adegbite, and Mohammed Dangyadi.