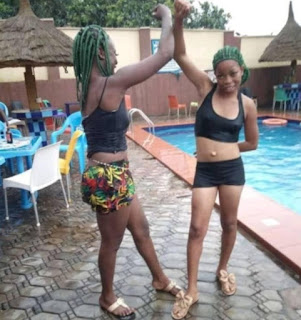 Two young women were publicly humiliated and punished for mimicking the mode of greeting used by members of the Black Axe confraternity.
The women were initially pictured all smiles by a poolside as they did the greeting peculiar to the Neo Blackism group. The video caught the attention of members of the group and they went after the women and punished them.
In one of the videos shared to Facebook by the official account of Blackism, one of the women can be seen kneeling down, naked from the waist upwards.

In another photo, both girls can be seen looking terrified as they knelt.

The Black Axe confraternity posted the photos on Facebook with the caption; “Hold and behold, this is what you get when you impersonating what you don’t belong. It’s actually not a child’s play. It’s called blackism. Stay off if you don’t belong. We are Neo Blackism,”