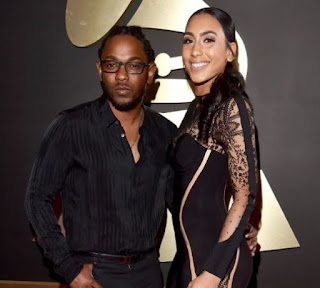 American rapper, Kendrick Lamar and his fiancé, Whitney Alford, became proud parents on Friday, July 26th as they welcomed their first child, a baby girl.
News of the Kendrick Lamar’s new born came as a surprise largely because the rapper, 32, who is famously quiet about his private life, didn’t announce that his high school sweetheart was pregnant.
Back in April 2015, the Grammy winner acknowledged that he was engaged while promoting his album To Pimp a Butterfly on Power 105.1’s The Breakfast Club show. Lamar and Alford have been together for about 10 years. Their relationship began when they were students at the Centennial High School in Compton, California.