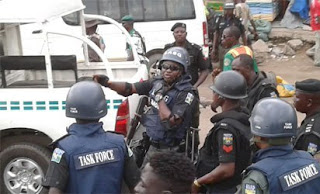 It was gathered that a world class Student of the prestigious Lagos State University identified as Lawrence has been arrested alongside with his brother on the 3rd Mainland Bridge for helping an accident Victim.
According to Report, Lawrence was coming back from Lagos island in the evening time of Thursday, July 25th where he went to visit his brother and they were both coming back to the mainland with “Uber“.

On getting to the 3rd mainland bridge, the Car developed a fault and they all came down to check the engine, it was some meters to them that a car hits a GOkada bike and the two people on the bike were fatally Injured after which the driver ran away after the sudden incident.
With the way in which Nigerian Police arrest people unjustly in situation like that, it was gathered that for some minutes, no one found it easy to move closer to them until the arrival of police patrol van which everybody expected them to pick up those two men on coma but picked pick up the “GOkada bike” instead and leave. It was this unexpected decision of the police force that made Lawrence brother got closer and challenge the police for neglecting the victim which lead to them exchanging words.
It was gathered that Lawrence brother transfer some amount of money to the Auxiliary nurse that came around to render first aid treatment. It was after this Lawrence and his brother was arrested for challenging, assaulting and disrespecting the Nigeria Police Force and they are both at ikoyi Prison (to appear in ikoyi Court tomorrow).
This report was gathered from the school (LASU) former social director, Boko Halal.
Students of the prestigious University urge the Students Union Executive to make us proud by taking the necessary steps and other member of the public for support in freeing this citizens.
#JusticeMustPrevail#SaveLawrence