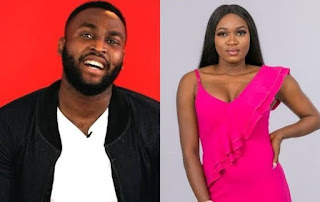 Big Brother housemates Nelson and Thelma have been evicted from the show, making them the sixth and seventh person to leave the house since the show began on June 30.
The Pepper Dem Gang edition of the Big Brother show is getting hotter as at least one house mates gets evicted from the show every Sunday. On July 21, it was Tuoyo who said goodbye to the time in the house. This week, two housemates , Nelson, has met the end of the road and will relaunch their new brand to the world.
This week, all housemates were placed on possible eviction for breaking Big Brother’s rules including not wearing their microphones properly, speaking vocabulary as well as getting into fight and heated arguments.
For this week’s eviction show, the show started with a thrilling performance from singer YCee, who had the audience enjoying his show of talent and mastery as they anticipated the events of the evening.
Then Ebuka asked the housemates some questions before announcing that Nelson will be leaving the house. Social media users reacted to the eviction and some could sense the sadness of Esther who appeared to have been liking the one-time head of house and has also been under the duvet with him on time.
Nelson who was invited on stage right after his eviction confirmed to Ebuka that he had a feeling he will be leaving the house and is not at all surprised that he got the least votes.
The evicted housemate told Ebuka that he thinks the winner of the show might be Mike or Omashola.
Thelma was also evicted shortly after and invited to the stage to be interviewed by Ebuka. Thelma who captured the attention of many viewers with her dancing steps expressed sadness that she is leaving the house. Thelma, revealed that she is engaged and that’s why she didn’t have any love interest in the house.