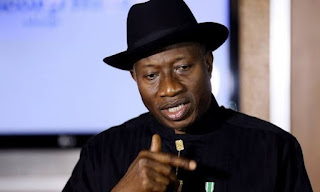 Nigerian Former President, Goodluck Jonathan has proffered solution on how the country can end electoral violence that has plagued the nation for decades.
Jonathan who spoke on Thursday at the 2019 African Security Conference holding in Port Harcourt, Rivers State.
According to him, the deployment of technology in the electoral process would serve as a means of ending electoral violence and political patronage of thugs.

He said: “Our country needs to come up with an electoral system where thugs and bandits would no longer be relevant. Many countries have solved this problem through the deployment of technology and electronic voting.

“Some desperate politicians and people in power are known to protect notorious outlaws often linked to violent crimes because of their strong-arm tactics that come handy during electioneering campaigns and elections; Where criminals are protected, they become role models.”

“There are instances where people of shady character or those with questionable wealth are rewarded with either public offices or even traditional titles.

This is not good for our system and the future of our country because it does not instill in our youths the right values. A society that does not consciously reject and punish criminality will open up itself for more security problems.”

Jonathan also called for the reform of the local government system in the country to make it more responsive to the needs of the people and more functional in combating insecurity in the country. Jonathan lamented the failure of governance at the local levels, noting that a “functional local government system is strategic to peace because it is designed not only to address basic social services but to also collaborate with traditional institutions to secure the people.”

He said: “It is sad that the local governments which used to serve as the engine of development because of its closeness to the people no longer functions effectively.

By grading local roads, building community centres, providing primary healthcare and maintaining local schools, the councils of old served as stabilizing factors in the society because, in doing all those, they were quite responsive to the needs of the people.

“The local government was also active in maintaining peace through effective community policing because of its strategic position and proximity to the people. They were able to do that, in the past, because the local government system enjoyed a measure of autonomy which gave them control over their resources, projects and programmes.

Today the story is different. The councils can hardly do anything else beyond paying the salaries of the members of staff, elected representatives and their aides. There is a need for the nation to correct this untoward development.”

The former President, therefore, called on the National and State Assemblies to “take a holistic look at governance at the local levels with the mind of reviewing the enabling laws and making the local governments more functional.”