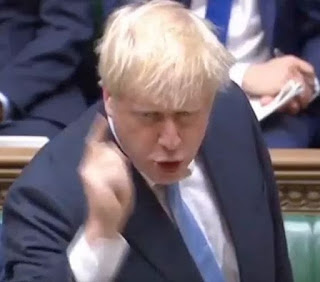 In his first appearance as prime minister in the House of Commons, Boris Johnson launched into a blistering assault on the Labour front bench.
He tore into Jeremy Corbyn after taking a grilling on protecting jobs, the environment and the NHS, before turning on shadow chancellor John McDonnell. Corbyn told Mr Johnson: ‘You have hastily thrown together a hard-right cabinet.’
He added: ‘His first appointment is the Home Secretary, the first Home Secretary for a generation to support the death penalty, can you assure the House now that your Government has no plans to try and bring back capital punishment to this country?’
He questioned whether Johnson would follow his predecessor Theresa May in promising to end austerity but ‘spectacularly’ failing to deliver. Corbyn added: ‘People do not trust this prime minister to make the right choices for the majority of the people in this country when he’s also promising tax giveaways to the richest of big business his own party’s funders.’ Mr Johnson hit back by tearing into the Labour leader and his chancellor, seething as he told the Commons: ‘The reality is, we are now the party of the people.’
The PM responded by saying the opposition leader wanted to ‘put up taxes’, including on people’s gardens, and said he could not be trusted on Iran.

Johnson continued:‘How on earth could he ask about Iran? ‘The right honourable gentleman who has been paid by Press TV of Iran. ‘Who repeatedly sides with the mullahs of Tehran rather than our friends in the United States over what is happening in the Persian Gulf. ‘How incredible we should even think of entrusting that gentleman with the stewardship of this country’s security.’