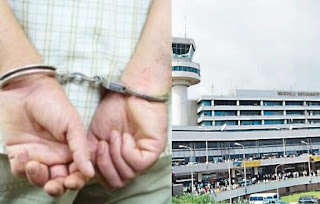 A 52-year-old American citizen identified as Breedlove Shawn, was arrested yesterday by police officers attached to the Murtala Muhammed International Airport Command for allegedly assaulting a towing service official at the airport.
The altercation ensued after Mr. Shawn parked at a restricted spot at the airport. Following an attempt to tow his vehicle, he hopped out from his vehicle and slapped one of the towing officials, the Managing Director/CEO of the towing Company, Billafary Towing Service Limited, Alhaji Lamidi Falekulo confirmed.
Divisional Police Officer, International Airport, Lagos, Mr. Danjuma Garba, confirmed the arrest of the American citizen and further disclosed that he will be arraigned before an Ikeja Magistrates’ Court sitting in Ogba on two counts bordering on assault resulting in grievous bodily harm.