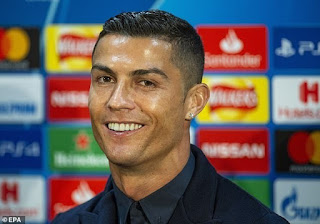 Juventus star, Cristiano Ronaldo will not face any charges over an alleged rape in the US state of Nevada a decade ago, prosecutors said on Monday.
The Clark County District Attorney’s Office said it had declined to prosecute the Portuguese star because it “cannot be proven beyond a reasonable doubt” that a sexual assault occurred. Kathryn Mayorga, a former model, has claimed that Ronaldo raped her in a Las Vegas hotel in 2009.
The former Manchester United and Real Madrid star reached a financial settlement with her following the incident but has denied allegations of sexual assault. The district attorney’s office said it had received a report from Mayorga who it identified only as “V” on June 13, 2009, reporting that she had been the victim of a sexual assault.
Police were unable to conduct an investigation at the time because she declined to say who assaulted her or where it occurred, the office said in a statement, but Mayorga contacted police in August of last year to ask that the case be reopened, at which point she named Ronaldo as the alleged assailant.
Prosecutor said; “Based upon a review of the information presented at this time, the allegations of sexual assault against Cristiano Ronaldo   be proven beyond a reasonable doubt. Therefore, no charges will be forthcoming.”
Ronaldo is widely considered one of the greatest footballers in the history of the game, having won the Champions League title five times once with Manchester United and four times with Real Madrid. He also led Portugal to the Euro 2016 title in France.