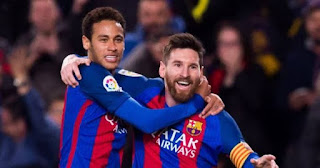 The 27-year-old singled out the Argentine great, with reports claiming he is determined to leave Paris this summer
The Brazilian called Lionel Messi the best player in the world and said the pair made a magnificent duo at Barcelona amid rumours the Paris Saint-Germain star could return to Camp Nou.
The 27-year-old is reported to be keen on a move back to La Liga but the Parisians will demand at least €222 million (£200m/$249m) for his signature, and they are not interested in a swap deal involving Philippe Coutinho and Ousmane Dembele.
Neymar won two league titles, the Copa del Rey three times and one Champions League crown during his four-year spell in Catalunya between 2013 and 2017.
And he was quick to heap praise on his former team-mate when asked about Messi at an event for his charity foundation, Instituto Neymar.
He said: “For me, he’s the best player in the world. The best player that I’ve ever seen play.”
“We made a magnificent duo. It was a pleasure for me, an honour to play with him. And, on top of that, he is my friend.”
The PSG forward further added to the speculation linking him to Barca by admitting the Liga side’s 6-1 victory over PSG in the 2016-17 Champions League campaign was one of his most cherished footballing memories .
Neymar found the net twice in that game as Sergi Roberto’s last-minute winner ensured a 6-5 aggregate victory that knocked PSG out at the round-of-16 phase after they had taken a 4-0 advantage from the first leg.
The frank admission about that victory being one of the fondest moments of his career angered some PSG fans. And a video posted to Neymar’s Instagram account showing him wearing a Barca shirt added more drama to the saga.
The uncertainty comes after a difficult summer for the Brazil star in which he missed the Selecao’s Copa America victory with an ankle injury.