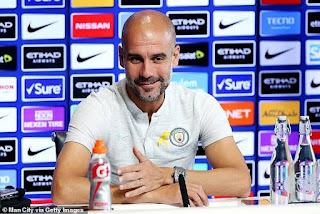 Manchester City coach Pep Guardiola on Wednesday said he will allow his players to decide who will captain the Premier League champions next season following the departure of long-time skipper Vincent Kompany.
The captain’s armband is up for grabs at City after Kompany left at the end of last season after 11 years spell in Manchester to take up a player-coach role at Anderlecht, the club at which the 33-year-old started his career.
Guardiola said: “We will choose the team captain. We will wait until everyone is back and they will choose their captain.”
David Silva led City on Wednesday as they came from behind to beat West Ham United 4-1 in a friendly in the Chinese city of Nanjing.