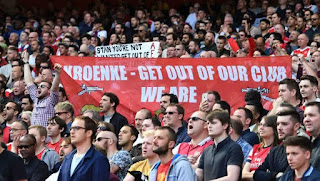 Arsenal fans have united to call on “absent” Stan Kroenke to end his reign of “passive” ownership and reinvigorate the football club, which they feel has become “an investment vehicle”.
In a combined statement from 14 supporter groups, Arsenal fans tell Kroenke, the US billionaire who also owns the NFL’s Los Angeles Rams, that “fans have never felt more marginalised” as they call for greater transparency.
“Arsenal is at a crossroads,” say the band of Gunners supporters, who are demanding a “desperately needed” restructure of the club to act as a “genuine check and balance on the owner”.
The statement also takes aim at the perceived lack of ambition from Kroenke after going 15 years without winning the Premier League and failing to finish in the top four for three consecutive seasons.
Arsenal’s “lack of strategy” in the transfer market and the wage structure is addressed, as well as the “poor atmosphere” at the Emirates – which they say has become a “soulless place” on matchdays due to “thousands of empty seats blighting almost every game”.