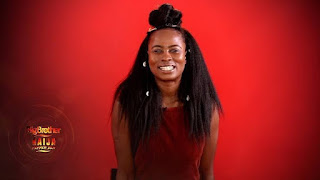 The Big Brother Naija ‘Pepper Dem Gang’ house is getting hotter with the eviction of housemates. Ella has just been evicted from the Big Brother Naija ‘Pepper Dem Gang’ show.
Five housemates were earlier nominated for possible eviction on Monday, July 8. They are Tacha, Kimoprah, Sir Dee, Ella and Frodd.
But since Frodd had the power to save himself and replace with another housemate of his choice because of the veto power card he won earlier in the game, he replaced himself with Mercy.
Seyi nominated Ella and Tuoyo, Mercy, Ella and Frodd, while Thelma put up Frodd and Tacha up for possible eviction.
Before the eviction announcement, the atmosphere in the BBNaija house was tensed and it was apparent on the housemates even though they tried to hide their anxiety.
With the eviction of Ella, there are 18 housemates left gunning for the BBNaija prize.
Avala and Isilomo were the first set of housemates to be evicted in the reality show.