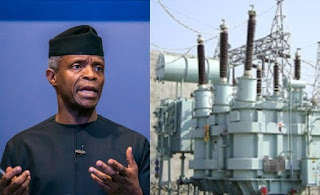 Nigerian Vice President, Yemi Osinbajo says the present administration has invested N900 billion in the power sector since it took over from the last administration in 2015.
Osinbajo revealed this during his courtesy visit to Chike Edozien, the Asagba of Asaba, on Friday. Noting that one of the problem in the power sector is that Distribution Companies (Discos) control a particular territory, the Vice President stated that the Buhari Government is working towards resolving the challenges.

He said: ”Since assumption of office, we have invested so far in terms of support N700 billion in the power sector. Earlier, we invested N200 billion”.

”And now we are saying that any company that wants to provide power to any territory, should be able to provide power for the territory and the people. We have been able to break the existing monopoly in the power sector. Whether upgrade or not, the DisCos should be able to serve the people. Another strategy we are trying to introduce is to open up the power sector by restructuring”.