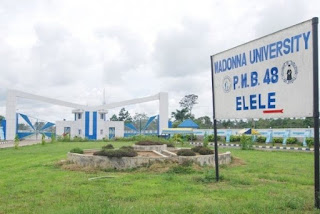 The six Madonna University students and lecturer who have been facing a court trial over a Facebook post the University management claimed was injurious to them, have been sent back to prison as the presiding judge, Justice Babatunde Quadri, was absent on July 2.
The University students and lecturer were granted bail by the court which they described as stringent in February but couldn’t leave as they had been unable to fully perfect the bail conditions.
One of the parents of the detained students, Mr Christopher Onyejekwe, revealed that he had gone to the founder of the institution, Rev. Fr. Emmanuel Edeh, 11 times to beg him to forgive the students after he was told that the matter had been stepped down for Wednesday by the court clerk, but Rev. Edeh refused.
Punch reported that Onyejekwe said that this is the third time the court would not sit since the students and the lecturer were granted bail. He also threatened to lead a campaign to withdraw no fewer than 200 students from the institution.

“It has become a fight to the finish; these children have been suffering in detention since February 11, 2019. Four of my children are in the Madonna University now, but all of them will be withdrawn.”

The Vice-Chancellor of the university, Prof. Chuks Ezedum who reacted to threats to withdraw students from the institution, described it as false and only invented by the families and associates of those facing criminal charges brought against them by the Inspector-General of Police.
He said: “No parent or guardian has requested the withdrawal of any student. The school community is safe, friendly and accommodating to all members.”