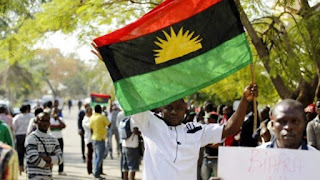 Leader of the pan Biafran group, Biafra Zionist Federation (BZM) Benjamin Onwuka, who was released one year after incarceration has declared he will be inaugurated Biafra President on July 30.
Onwuka was arrested on August 20, 2018 in Enugu by security operatives during one of his groups Biafra agitation activities and was kept incommunicado for several months. He was later transferred to Owerri Prisons from where he was released on July 1.
Addressing journalists shortly after he arrived Enugu, Onwuka said he had become more strengthened in his push for Biafra.
He claimed that with the support of the United States, his inauguration as Biafra President would take place on July 30, at the Michael Okpara Square, Enugu.
Onwuka equally claimed that while in detention, a meeting was held between him and President Muhammadu Buhari where he told the President that there was no going back on Biafra.
He declared: “I am happy to inform our people that our victory is here. I have always said it that they cannot stop us.”
The defiant Onwuka assured Biafra has come to stay.