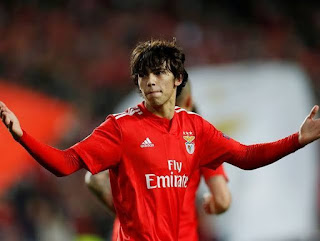 Atletico Madrid have signed Portugal youngster Joao Felix for 126m euros (£113m) from Benfica in the fifth most expensive transfer in history.
Benfica have confirmed Atletico will pay the fee in instalments, after bidding 6m euros more than the 19-year-old’s 120m euro release clause.
The forward, Felix has signed a seven-year deal with Atletico. He made his senior debut in August and scored 15 goals last season as Benfica won the title.
Felix is now the second-most expensive teenager following the 180m euros paid to Monaco by Paris St-Germain for France forward Mbappe in 2018.
Atletico striker Antoine Griezmann has confirmed he will leave the club this summer, with Barcelona expected to pay his buyout clause of 120m euros.