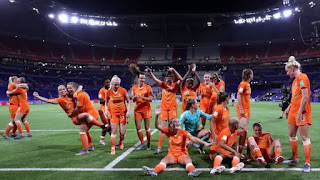 The Netherlands scored 1-0 in tense semi-final extra time late on Wednesday at Stare de Lyon in France to seal their place in the World Cup final against United States on Sunday.
The Oranjeleeuwinnen or Orange Lionesses, as they are fondly called will meet the defending champions, the United States in the final on Sunday.
The team coached by Sarina Wiegman prevailed against Sweden after extra time, with a winning goal by Jackie Groenen in the 99th minute.
Its a historic win for them as it’s the first time the Dutch women’s side has reached a World Cup final. Sweden following their defeat will take on England in a third-place playoff.
England women’s 2-1 loss to the US on Tuesday marked the team’s third-straight semi-final defeat in major tournaments after they bowed out against Japan in the 2015 World Cup in Canada and later lost to the Netherlands in Euro 2017.