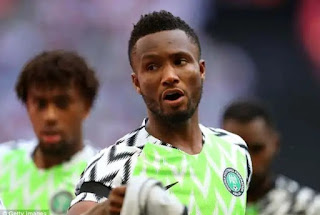 Super Eagles captain, John Obi Mikel, has shared his opinion on who is a better player between Cristiano Ronaldo and Lionel Messi.

Mikel made his choice public when fielding questions from the Super Eagles Media team.
The former Chelsea star was asked to choose between Ronaldo and Messi, who have won ten Ballon d’Or awards between them.

Mikel, who opted the Barcelona star, said, ”Messi all day. For me, he is from a different planet. I’m grateful to have been able to play with him, from U20s we started playing against each other, played against him so many times.”

Mikel also chose Abuja over Lagos and picked female musician Yemi Alade as the better musician than Davido.
He also said he prefers winning the World Cup over the UEFA Champions League.