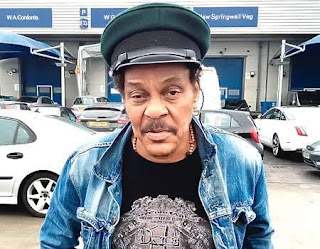 Legendary Nigerian singer, Majekodunmi Fasheke, aka Majek Fashek, has maintained that his downward spiral into the abyss of drug abuse that almost ruined his career wasn’t ordinary.

Speaking to Sunday Scoop, he said: “I never took drugs. I only took marijuana and alcohol. However, those are things of the past. I still smoke cigarette once in a while but I don’t take wine anymore. In life, everybody has ups and downs, and some of these things are not ordinary. My problem wasn’t ordinary. There was a particular time I travelled outside the country and immediately I got back to Nigeria, I sensed that something had gone wrong. However, they could not destroy my destiny because God is in control.”

The Veteran singer also expressed disappointment at Soundcity for refusing to play his music videos. He said, “Uzo (his manager) mesmerised me with that video. He has lived in America for a long time and he has the necessary skill (to shoot good videos). If my videos are not played, then people would think I’m not doing anything but drinking gin and taking drugs. There are a lot of problems in Nigeria today because we are not united, and one of my new songs, Akugbe (Unity), addresses that. If everybody, irrespective of where they are from, join hands and work together, Nigeria would be greater than it ever was.”

“In England, we shot a video at Canary Wharf, and when we arrived in Nigeria, we paid Tajudeen Adepetu (CEO of Soundcity) a courtesy visit. When we met after two weeks, he told me the video wasn’t up to their standard. I didn’t find it funny. Meanwhile, we have lots of songs by ‘Yahoo boys’ where girls nearly go naked and they sing about mundane things. Are those ones the quality videos? After sometime, we went back to the United States and shot the video for Akugbe on Red camera, which is one of the best cameras for cinematography. When we got back from the United States, we took the video to Soundcity, and they also said it wasn’t up to standard. I felt disrespected. That song promotes our culture and I don’t think there is anything wrong with it. We should learn to celebrate our own. Which of Bob Marley’s videos were shot with Red camera? Soundcity has a question to answer, to say how that video is not up to standard. Look at some of the songs they play on that particular station and compare the standards with mine.”

His manager, Uzo Omenka, also reechoed the singer’s sentiments. He said, “Majek is a hard-working legend that doesn’t deserve that type of treatment. The man has actually paid his dues and he should be respected. Majek was on the David Letterman Show in 1992, long before people like President George Bush and President Barack Obama had the opportunity to be there. He actually produced this whole album. However, the song is played on other stations such as Hip TV and others.”

While dismissing insinuations that Majek is living on past glory, Omenka said, “Majek’s music is evergreen. If you want to connect with the older generation, you need to play music such as Majek’s songs. Till today, if they play songs such as Send down the Rain and So Long, Too Long, everybody is usually excited.”

Majek chipped in and said: “Many of the songs I released in the past were ahead of their time. If you say I’m ‘yesterday’s artiste’, what is the new generation of artistes bringing to the table? We need songs that are actually evergreen and pass meaningful messages. Would you want your daughter listening to the new songs with vulgar messages? Some of these songs contribute to the high level of drug abuse and other vices in the country.”