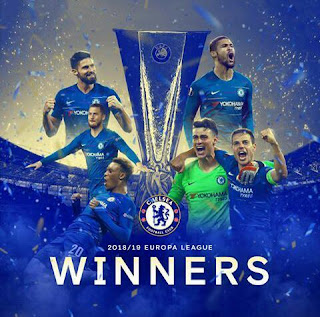 Eden Hazard’s brace helped Maurizio Sarri claim his first major trophy as Chelsea crushed Arsenal 4-1 in the Europa League final in Baku on Wednesday.
In perhaps his final appearance before a mooted move to Real Madrid, star man Hazard struck two second half goals to confirm Chelsea’s second triumph in six seasons in this competition.
Olivier Giroud sparked the landslide against his former employers in the 49th minute before Pedro put a second past retiring Gunners goalkeeper Petr Cech.

Alex Iwobi pulled one back in between Hazard’s double but Arsenal faded horribly after half-time and, having finished fifth in the Premier League, are now consigned to another season outside the Champions League.