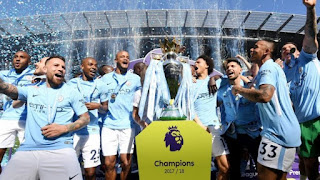 Manchester City are once again champions of England. Pep Guardiola’s men came from a goal down at the Amex, to defeat Brighton 4-1 and retained their Premier League title.
The champions came into the final game of the season one point ahead of Liverpool and knowing that only a win could assure them of retaining title.
However, it was Glenn Murray that opened scoring, before Sergio Aguero, Aymeric Laporte, Riyad Mahrez and Ilkay Gundogan settled the game.
Liverpool won 2-0 against Wolverhampton Wanderers in their home game, while Cardiff shocked Manchester United 2-0 at Old Trafford.
Arsenal saw off Burnley 3-1 at Turf Moor and Leicester City held Chelsea to a 0-0 draw at the King Power Stadium.

WHAT A FANTASTIC SEASON!!!!