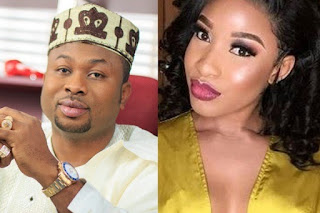 Nollywood Controversial Actress, Tonto Dike, has revealed why she described her estranged husband, Olakunle Churchill as a “40 seconds” man.
Tonto gave the explanation while responding to a fan who berated her for using Churchill’s alleged sexual deficiency to publicly shame him.
Tonto said she made her ex-husband’s inabilities public because he first accused her of being on hard drugs.
Recall that Tonto Dike had in a recent interview with Daddy Freeze of Cool FM, claimed the father of her son suffers from premature ejaculation and only lasts for “40 seconds.”
Her claim has since generated a lot of controversies with her followers taking diverse stands. In a post she shared on Instagram, Tonto warned that what happened to her can happen to anyone and advised that others should learn from her situation.

She wrote, “So a man f**king man say I’m on drugs and I can’t use his sexual disease against him?

“For me, I will drag your life from hell and back until I’m ok!! We all can’t be the same, you know.”