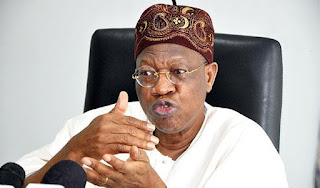 Nigerian Minister of Information and Culture, Lai Mohammed has said it would be unfair for Nigerians to measure the current administration’s achievements in the fight against corruption by the number of convictions it has secured so far.
The minister who made the statement on Easter Monday when he featured on a live TVC where he listed the achievements of the administration, Mohammed said: “Under this administration, we insisted and have succeeded in ensuring that all payments and revenues are paid into the TSA. Before we came in, the Federal government had over 2,000 different accounts in various banks, which resulted in paying several billions of naira in charges.”
He continued; “The government then also never had an idea of how much it had as revenue but today over N9.3 trillion has gone into the TSA and that is why it is possible for us to invest, especially in the area of infrastructure and social investment programmes.”

The minister disagreed with the allegation that the government’s anti-corruption fight is against perceived enemies and the opposition party, saying it’s all a misconception. He said: “We had 16 years of unbroken rule by the PDP so the likely people who will be accused of misuse of resources should be the people who were in charge, We also have some former governors who decamped to APC who have also been convicted.”