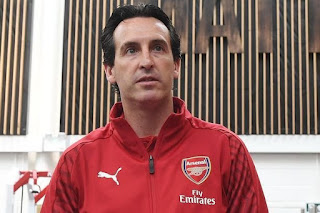 Arsenal could sell nothing less than 7 players at this summer transfer window to fund a squad overhaul.
According to Daily Mail, Arsenal manager, Unai Emery, who replaced former Gunners boss, Arsene Wenger last summer wants to bolster his squad at the end of the season.
Centre-back, Shkodran Mustafi, tops the list. The 27-year-old has been the subject of much criticism following Arsenal’s defeat to Crystal Palace on Sunday.
Arsenal’s high-earners, Mesut Ozil and Henrikh Mkhitaryan are also in the list.
Others include Mohamed Elneny, Carl Jenkinson, Calum Chambers and David Ospina.
The Gunners are currently in the fifth position on the Premier League table, one point behind fourth-placed, Chelsea.
Emery’s men will battle Wolves on Wednesday night in the Premier League fixture at Molineux Stadium.