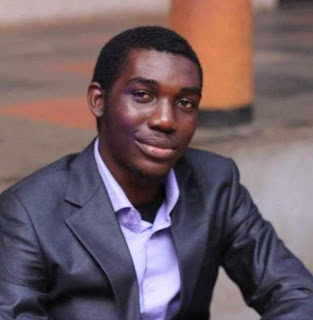 While some students were busy enjoying the Easter period, news filled the air about an OAU Student pulling the plug over poor academic performance.

The deceased, Kolapo Olowoporoku was a student of Computer Science and also the former financial secretary of the students’ association.

It was gathered that he should have graduated in the 2016/2017 academic session but he remained on campus due to some outstanding courses (CVE & CSC 517) he had to pass before he graduated.
Kolapo Olowoporoku with Facebook username “Olowoporoku kay-pee Kolapo” was the class rep of his class and ought to have undergone the compulsory NYSC service currently with his course mates who had their convocation last year.

The deceased took his outstanding courses in the last academic session 2017/2018 but it was gathered that he didn’t get up to the required pass mark to bid the said courses farewell.

It was gathered that people who saw him confirmed he looked depressed but no one knew exactly what went wrong with the him.

He was said to have resorted to taking poison on Monday, but the poison didn’t kill him until 3 to 4 days after.

May his gentle soul Rest in peace and God grant his family and loved one’s strength to bear the loss. 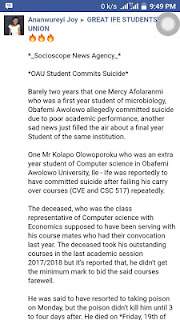