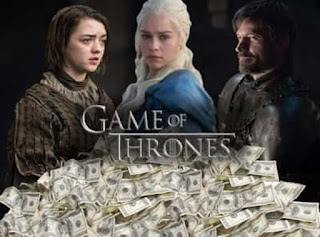 According to Oddsmakers Jaime Lannister is not long for the final season of “Game of Thrones” but there’s still some doubt over who will kill the “Kingslayer.”
According to the cyber-gambling site, SportsBetting.ag, Jaime’s favored to die first with 5/1 odds. What a difference 2 weeks make, Jaime opened the season as a long shot, at 50/1 odds, to die first.
Jaime Lannister is also the new favorite to be Arya Stark’s first kill of the season, with 2/1 odds. Arya freaked everyone out over the weekend when she ditched her clothes for her first sex scene, but she still hasn’t spilled (killed) the blood of anyone yet this season.
Jaime’s really gotta watch his back, because in addition to Arya, his sister, Cersei Lannister, already hired Ser Bronn to kill him. He also need to worry about the Night King and the army of the dead descending on Winterfell in the next episode.
No wonder Jaime’s odds to sit on the Iron Throne keep decreasing. As it now stand he’s now a long shot at 33/1 after entering the season with 14/1 odds.
Speaking of the Iron Throne, Daenerys Targaryen now has 5/1 odds to rule Westeros. She had 3/1 odds last week, but Jon Snow just dropped a bombshell and told her he’s the rightful heir of House Targaryen.