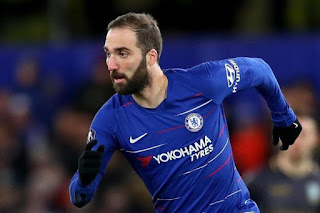 Chelsea striker, Gonzalo Higuain has revealed the greatest ‘regret’ of his life ahead of his side’s Premier League clash with Burnley on Monday night at Stamford Bridge.
The Argentine, who joined Chelsea on loan from Juventus in January, disclosed that struggle with self-confidence on and off the pitch earlier in his career was the greatest regret of his life, adding that he has ‘suffered’.
However, he added that he is now at a stage in his life where he does not get hurt by anything.

Speaking ahead of Chelsea’s clash with Burnley, Higuain told ESPN: “I’m at a stage in my life where I do not get hurt by anything. I’ve suffered. If you do not take part in social media, you get beaten up.”

“I played in the best leagues, the top teams, three World Cups and Copa America. At 5 years of age, I could not imagine having 10% of this and I did it, why should I worry about what they say?”

Higuain added: “I’ve always regretted taking refuge and not going out for fear of what they could say to me, that was a regret of my life.”