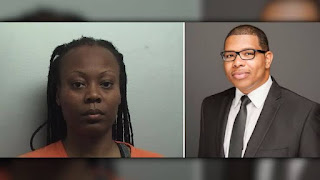 A woman identified as Latoshia Daniels, shot at Pastor Brodes Perry of Tennessee, USA, several times when she showed up to his home unannounced.
According to reports, the distraught woman also shot at Perry’s wife who presumably tried to protect her husband from harm. Cops showed up to the Meridian Place Apartments and found the two victims seriously injured.
Meanwhile, Daniels was still armed and refused to put down her gun. Perry’s wife said she let Daniels inside their home earlier because she knew her from her time living in Little Rock. When she was escorting Daniels back out, that’s when she pulled out a handgun and started blasting and screaming “You broke my heart” at the husband, according to court papers obtained by Q13 Fox.
His wife then knelt by him, and Daniels told her to move out the way. That’s when she shot her in the left shoulder. Perry’s wife explained to police that she wasn’t aware of any affair going on between her husband and Daniels, but the shooter’s actions made an affair seem possible.
Both victims were rushed to the Regional Medical Center where Brodes Perry was later pronounced dead. While at the hospital, cops say Daniels also attacked an officer. They said the officer was trying to take her into custody and that’s when she jerked away and pushed him before taking off running. Officers said they had to force Daniels to the ground before they could have her handcuffed.
Daniels now faces first-degree murder charges along with attempted first-degree murder, possession of a firearm during the commission of a felony, assault on a police officer and resisting arrest. She’s currently held without bond.