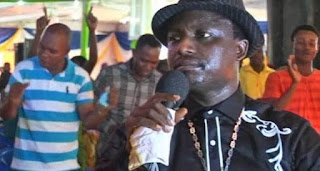 A Ghanaian priest, Pophet Ebenezer Adarkwa Opambour Yiadom of the Ebenezer Miracle Worship Center in Kumasi, Ghana has stated that people with big manhood and bleached skins will not make heaven.
The popular man of God is well known for self-proclaimed spiritual powers and extreme Christian practices which have often sparked national outrage with many accusing him of being a fake pastor has disclosed.
The pastor said that men who for sexual promiscuity bleach their skins and do other things just to attract the opposite sex and men who take pride about their big manhood are bound for hell fire.
According to him, it encourages lusts among people and tends to frustrate other men who are less endowed to seek help elsewhere which later turns out bad for them.
Delivering a sermon in his church on Sunday, Opambour highlighted the need for this generation to forego worldly lusts and seek the way of the Lord because judgment beckons everybody.
“Nobody is above judgment; not even a beautiful lady with big breasts that satisfy men during sexual intercourse”, he preached.
”You are an honourable man who has bleached your skin, trimmed your hair; you have done waves and the ladies say you’re handsome; hey fine boy, you are not above judgment”, he continued.
“You’re also a man, all the women say your joystick is big; women are praising you because of your joystick, women are buying you cars, because of your joystick women are even buying you clothes; I’m telling you that your big joystick can’t take you to heaven so repent”, he fumed.