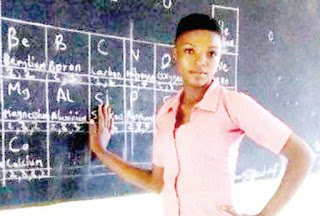 A 16-year-old SS3 boy, Chibuzo Ohaneme, has been arrested for stabbing his female classmate, Olamma Ekwebelem, to death.
It was gathered that the incident happened in Umuoli Ikpem, Ehime Mbano Local Government Area of Imo State on Thursday.
Sources told the media that Ohaneme was irritated that Ekwebelem had repeatedly turned down his relationship proposal to her.
We gathered that while the alleged murderer hails from Umuohum Umuna in Onuimo LGA of the state, the slain teenager, who was to sit for SSCE in June, hailed from Ikpem.
“The boy and the girl are classmates and of the same age. The boy had repeatedly asked her out but she refused.
“She reported the boy’s disturbances to her parents, who reprimanded him but he kept on disturbing the girl.
“Frustrated, the boy ambushed the girl and stabbed her to death. The community was about setting the boy’s father’s house ablaze when the police intervened”, the source said.
The Imo State Police Spokesperson, Orlando Ikeokwu, confirmed the incident to the media on Saturday, stating that the suspect had been arrested.
He said “One Chibuzo Ohaneme of Umuohum Umuna, Onuimo LGA was arrested for the murder of his friend, Olamma Ekwebelem of Umuoli Ikpem.
“The suspect stabbed the victim in her stomach and she died. As I speak to you, the case file and the suspect have been transferred to State Criminal Investigation and Intelligence Department, Owerri, for further investigation.”