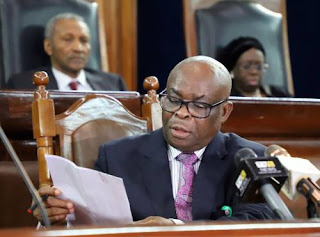 There may be a new twist in the trial of the suspended Chief Justice of Nigeria, Justice Walter Onnoghen as there are reports that the embattled CJN may have resigned his position.
Justice Onnoghen reportedly sent his resignation letter to the president on Thursday, barely 24 hours after the national judicial council concluded investigation on various allegations of misconduct levelled against him.
However, there has been no official statement from the presidency on the matter yet.
The embattled CJN is standing trial at the code of conduct tribunal on a six-count of alleged failure to declare his assets to the code of conduct bureau. He has however denied the allegations.
The NJC on Wednesday had conveyed their decision on Justice Onnoghen and the Acting CJN, Justice Tanko Muhammad after the five-man committee constituted to investigate the allegations against them submitted their findings.
The NJC, however, did not disclose its recommendations regarding both justices but it is believed that the council may have recommended the resignation of Justice Onnoghen.
According to statement from NJC’s director of information Soji Oye, the council had resolved that, by the nature of the decision reached, it would be inappropriate to publicise it before conveying it to the president.