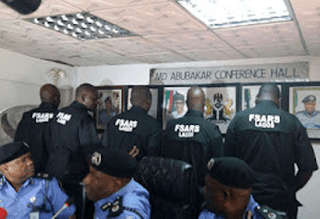 …CP assures justice will prevail
Lagos state Nigerian Police, has on Monday arrested the suspected team of the Federal Special Anti-Robbery Squad, FSARS who allegedly killed Kolade Johnson, on Sunday.
Kolade was reportedly murdered by FSARS operatives who had visited his residential area on Sunday afternoon, to arrest one of the boys of a major music producer who was wearing dreadlocks.
However, events took an awful turn when the operatives reportedly fired on Kolade who was watching a football match, leading to his death.
The news of his death sprung up criticisms and negative comments against the Nigerian Police force, with many Nigerians demanding to end FSARS in the country.
In view of the above therefore, Police swooped into action, and through various details and accounts gathered from eyewitnesses, arrested those who allegedly perpetrated the act.
In a statement signed by DSP Bala Elkana, Police Public Relations Officer, Lagos State, and made available to Vanguard, Police assured Nigerians that the force would make sure that justice prevailed.
The statement reads: On 31/03/2019 at about 5.05pm, the Command received a distress call that Lagos- Abeokuta Express Way has been blocked by some angry youths who were protesting the shooting of one Kolade Johnson m of No.1 Beco street, Onipetesi, Mangoro Bus Stop by a team of Policemen from Anti Cultism unit.
A team of policemen from the Rapid Response Squads and Metro patrol were promptly drafted to the scene. The account of eye witnesses helped in identifying the team which fled the scene immediately after the incident. Members of the team suspected to be involved in the shooting have since been arrested and are currently in Police custody undergoing interrogation. They will be subjected to internal disciplinary procedures, and may be prosecuted in conventional Court if implicated by ongoing investigation.
Meanwhile, the Commissioner of Police Lagos State, CP Zubairu Muazu mni calls for calm, assuring that justice will prevail in this case. The Commissioner of Police also condoles with the family, friends and well wishers of Kolade Johnson.
The CP has promised to initiate far reaching reforms to help in repositioning the Anti Cultism Squad for effective service delivery, particularly in areas of respect for Human Rights and proficiency in the use of firearms. Members of the Public who have complaints on the activities of Anti Cultism Squad or any of our Police teams should call the following numbers 08063299264, 08065154338 and 08060357795, please.
Meanwhile, the CRU has registered the unfortunate death of Mr Kolade Johnson as a case of Excessive Use of Force, Tracking No. #CRU275741.
Lagos State Police is treating the case as a homicide, CP Lagos will brief the public on this case today.