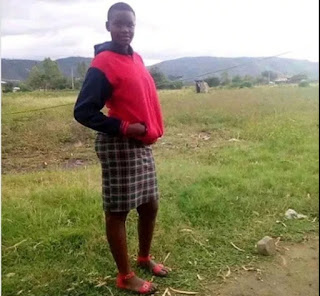 17-year-old Cynthia Mubanga, has begged for forgiveness after raping a 4-year-old boy.

It was gathered that the incident happened in Kalulushi, Zambia.

The teenage girl, a grade 12 pupil, told police that she raped the young boy because she had no boyfriend to sleep with.

17-year-old Cynthia said she has been feeling ‘hot’ ever since she came to befriend Kathrine (the elder sister to the boy she raped) as she has been telling her stories on how it feels to have sex with a man.

“I was feeling too sexy because of the stories which my friend Kathrine used to tell me at school. And due to lack of a man to sleep with, I decided to sleep with her young brother…I am really sorry”, she told the police in front of her parents and parents to the boy.

Meanwhile, it was gathered that medical examinations conducted on Thursday proved that Cynthia is still a virgin as the boy failed to break her hymen.

It was further learnt that the young boy identified as Ken, was taken to the hospital for tests and injection as his private part had a few sores.

He was, however, found to be negative of all sexually transmitted diseases.

It was equally gathered that the girl is still in police custody but the police are urging the parents of the boy to withdraw the case since their son is medically okay.