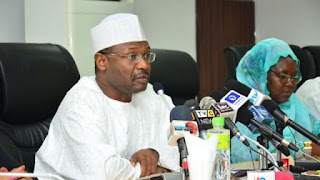 The Independent National Electoral Commission (INEC) has clarified its decision not to allow Atiku Abubakar, the PDP presidential candidate in the just concluded election, to inspect election materials.

Atiku headed to the court after losing the February 23rd election to President Buhari and filed an application to compel INEC to grant him access to materials used for the election and the court granted his prayer.

A statement released by PDP’s spokesperson, Kola Ologbondiyan, last week said that despite the court order, INEC has refused to allow Atiku inspect the election materials.

Reacting to Ologbondiyan’s claim, spokesperson to the chairman of INEC, Rotimi Oyekanmi, told TheCable that INEC will comply with the court directive “if and when the commission receives the order”.

“It is common knowledge that since the declaration of the results of the presidential election, the commission has been busy with the multiple activities associated with the national assembly, governorship, state houses of assembly and federal capital territory elections.
Only last Thursday, the commission presented certificates of return to senators-elect and house of representatives members-elect, including PDP members. Nevertheless, the commission will comply when the due process is followed” he said